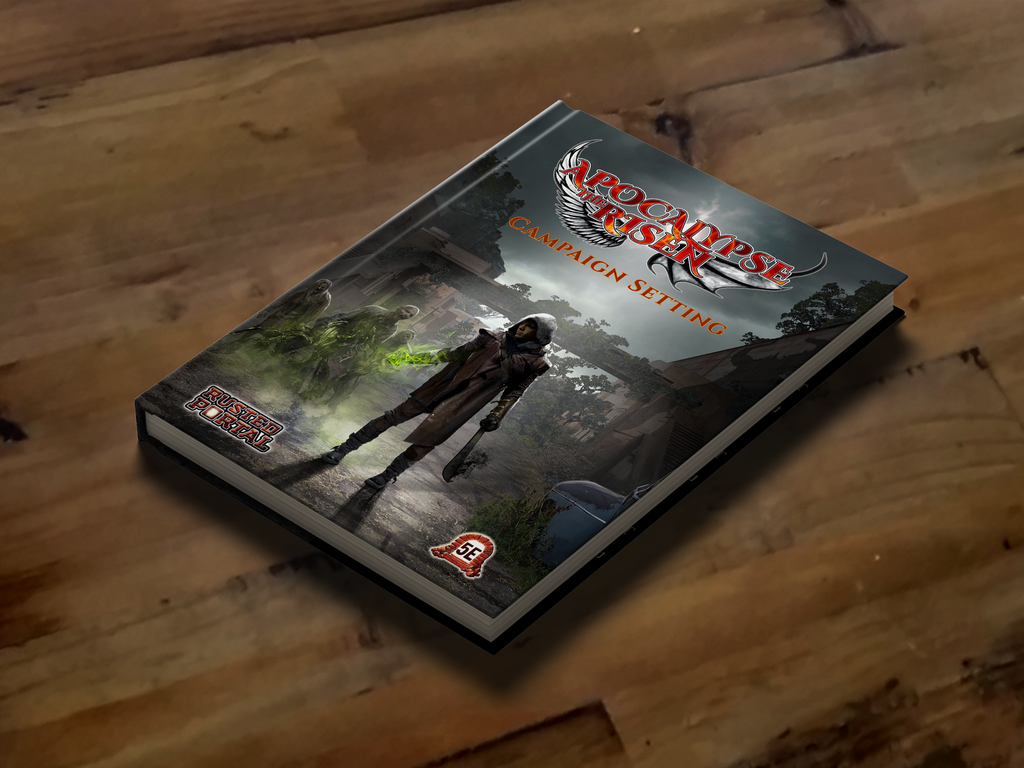 Are you excited? We are really excited! We've broken through another stretch goal and about halfway to the next. You know well how this last week can go and we are dedicated to pushing hard to close strong. Keep with us, retweet and share our social media posts, blast your own with #AtRRPG or "Apocalypse the Risen", and share with your gaming friends and local gaming stores (we've got an add-on just for them)!

Below is a recap of the current stretch goals and what's coming up with the next two... just to make sure you're sufficiently excited.

These are absolutely both doable goals so keep pushing and let's get it done.

As a first time release teaser... meet your Conservator Iconic: "Mushroom" by artist Raven Mimura. "Mushroom" is one of our convention characters, a mutated human and wielder of Darkland weaponry and armor. In an epic battle against the dreaded Siren Pine, Mushroom was the last remaining of his hunting party, finishing off the foul evergreen with a series of flame strikes. You know who you are, PaizoCon AtR Player!

Okay, and maybe I told Raven that Mushroom should look like Reid. :)

Have you considered the Build a Colony add-on? There is no better value than designing an awesome colony included in the Apocalypse the Risen Campaign. Plus you will work with us and get added to the credits as a colony designer! Build the community and a colony!

Keep it rolling and let's close this campaign out with a big push in the final week!

We had some great questions from NecroNuke being answered here. You will find some details on old and new tech, information on Paradox not previously released, and a recap of some future products for both Apocalypse the Risen and other connected Worlds of the Portal campaign settings.

Feel free to ask any new questions this sparks!

*Classified Tech*: I’m going to blame Jeff and his 20 years in the Air Force. Jeff likes to believe that warfare tech exists that we don’t know about in present day. I suppose if that were true you might find such tech at places like Area 51. Certainly, no future tech exists, and post-Rise tech is limited at best. You won’t find powered ex-suits or celestial-powered fighter jets, even if that sounds killer! That stuff would be for another world entirely. (Also, thank you for your service, Jeff!)

*Ancient Artifacts*: Now these absolutely exist. We have been collecting stories of interesting artifacts throughout history. Some of these items appear in iconic stories, others in adventure hooks, and yet a handful of others in the magic item section.

Pre-Rise antiquities may have been created with magic or infused with suppressed energy realized only after the Seals were broken.

Post-Risen magic items occur from supernatural energy attaching to items through events or just chaos. We like to reference Warehouse 13 as an influence in these designs. Magic items you are used to in 5E or Pathfinder are more likely to be found here.

*Paradox*: This is our version of the “Astral Plane” meets the “Upside Down” or “Dark World” from other stories. Paradox will be found in all our Worlds of the Portal campaign settings, accessed differently depending on that world.

In Apocalypse the Risen it is possible to physically travel to Paradox. When it is daytime on Earth it is night in Paradox and at night Paradox is lit only by the various phases of the moon. There are real and unique dangers within Paradox, including entirely different creatures. Joseph Thompson (Project Biomodus) will be illustrating the first of these creatures and we are damn excited about that!

Worlds of the Portal: The Light and the Darkness

* Bestiary Series (The Dead, The Damned, The Darklands)

Example: "Horror Scope" will be a higher level adventure introducing the Zodiac, twelve devils once given influence over time that had been hiding out on Earth for over two thousand years.

World of the Portal Campaign Settings

* Purgatory the Tormented (Sword and Sorcery, hub to all WotP campaign settings)

This list is not exhaustive and does not include connected card, board, and war games which will utilize the campaign settings in new ways.

This is just the beginning for Rusted Portal Games and we could not be happier you are a part of it. Let's finish strong!

In case you missed the changes on the page, we have added larger images of the cover mock-ups, the spread layout mock-ups, and made those spreads link to the full Maverick Class builds for Pathfinder and 5E. Also linked here for easy access!

We love any feedback or questions you have about the classes or campaign setting.

Keep blasting social media, we are getting close to more Truth Transmissions!